I sit at my computer writing this post on the eve of a widely appreciated day known as Fat Tuesday, or Mardis Gras. This day is in turn the eve of another significant day, that of Ash Wednesday, which marks the start of the Lenten season. I’m sure we’ll all chow down on our paczki and ice cream and other delightful junk foods, crammin’ it all in before Lent. But then the penitential season will begin, and with it, the sacrifices, as well as the blessings.

As I said, Lent is a penitential season – a season in which we make reparation for our sins through self-denial, as well as strive to grow spiritually. It is common to give something up for Lent, especially something that we enjoy. My family traditionally gives up sweets and desserts. I typically give up snacking in between meals in addition. I’ve known people who have given up pants (wearing skirts all during Lent) or even sleeping in their bed. Other sacrifices could include watching TV or movies, listening to music, or the internet. I’ll admit, these sacrifices don’t sound like pleasant things to do.

So why do we sacrifice during Lent (or at all)? We may think, “I would die if I gave that up!” But, that is the beautiful and wonderful point of sacrifice. Sacrifice and self-denial mean dying to ourselves and what we want for the sake of others and for the sake of Christ. It means being willing to give up something that we love or enjoy for the love of God. That may not sound like that worthy of a cause to some. But let’s put it into another perspective. 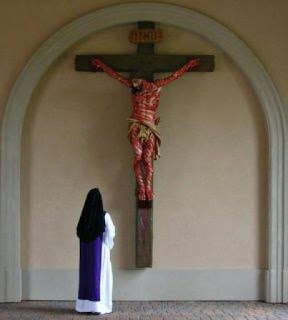 When Jesus, God Himself, came down to earth as a man, He was scourged, mocked, crowned with a crown of thorns, and crucified. Why? For us. He underwent extreme torture and died the death of a criminal  all for the sake of every single human being ever to live, to redeem us from our sins. “He was pierced for our trangressions, crushed for our iniquity. He bore the punishment that makes us whole, by his wounds we were healed.” (Isaiah 53:5) In other words, he underwent for us the punishment that we as sinners deserve to receive. Did God deserve it? Of course not. But did he do it? Did he sacrifice his very self in so powerful a way for us, even though it should have been us hanging on that cross? Yes. And this was and still is the ultimate sacrifice, the sacrifice of all time.

This, my readers, is why we sacrifice. To make reparation for our sins; to give a gift back to God for what he the one he gave to us; to sacrifice for the sake of God because he did so for us. And when you think of things as how I wrote above, it really makes giving up junk food for Lent not sound so bad. It may be difficult for us, but that’s okay. That is what will make the fruits of our Lenten sacrifices all the more abundant.

But remember – Lent is not only about misery! Well, it isn’t about misery to begin with. But, it is also about seeking to deepen our spiritual lives and our relationship with God. It is an especially blessed time where we should make a strong effort to pray more, or go to Mass or confession more, or anything to deepen our prayer life. We should try to do some more reading of Scripture or other spiritual reading. Howsoever we choose to do it, we should seek to grow closer to God and to grow spiritually. Doing this will be what really makes our sacrifices all the more fruitful!

So, dear readers, as we rapidly approach the beginning of Lent, let’s try and find areas of our life that could use a little discipline, or a little extra oomph. Let’s try to grow in self-denial for the sake of God, and strive to  grow closer to Him through deeper and more frequent prayer. Let’s make this Lent an awesome one!

(From “Random Reflections”) He is Risen!