Last night, I watched Mel Gibson’s movie, “The Passion of the Christ” with some friends after praying the Stations of the Cross. I’d seen this movie twice before, although it had been 3 or 4 years since my last viewing of it. When I watched it last night, it moved me deeply ~ I think it touched me more profoundly, more powerfully than ever before. I came to new realizations and deeper understandings of some things, such as the Eucharist, which I won’t elaborate on right now, as I’m still processing them in my heart. But bottom line, last night this movie impacted me to the core.

I recommend that you watch “The Passion” this Lenten season ~ and when you do so, really watch it. Let the significance of Christ’s passion and death seep into your soul. Recognize the extraordinary way in which God Himself took on the punishment of your sins. Find hope in the fact that by His death, you have life. Let the bloody reality of Christ’s sufferings move you ~ and they will. 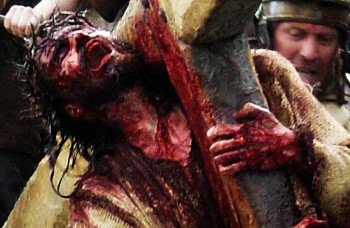 Pray through the movie as you watch it. I was squeezing my rosary through the whole thing, as well as frequently talking to Jesus and Mary.

Pray after you watch the movie. When we finished, my roommate and I immediately went to the adoration chapel to pray. Then this morning, I went to Mass, confession, and adoration again. If you are moved as much as I was, you’ll crave nothing but prayer and the sacraments for a little while.

Lent is a season of penance and of meditating on Christ’s passion as we prepare to celebrate His resurrection at Easter. Watching “The Passion of the Christ” is a great way to enter into deep, heartfelt reflection on His passion and death.

Just to warn you, it will be an emotionally draining experience, and I know some people will have a harder time with it than others. But watch the movie anyways, humbly and prayerfully. It will move you in deep, powerful ways.

I’ll leave you with a poem I wrote after my first time watching “The Passion,” back in 2010. Forgive the somewhat childish sound of this poem ~ it is from five years ago! While the movie touched me in different ways this time around, the ways in which it moved me back when I wrote this poem are certainly still relevant and important.

It Should Have Been Me
Written by Stephanie in March 2010
God sent you here, Jesus
To die for our sin.
This you did willingly,
To God’s will you gave in.
You did not deserve it—
To suffer and die.
The one up on that cross
Should have been I.
All the blood that you shed
Should have been mine.
The scourging, the thorn crown—
They should have been mine.
To think how you suffered
And endured such torment—
I know that that should have
Been my punishment.
You did nothing evil;
It was I who sinned.
Like a dog you were treated
To die as you did.
I thank you for dying
For me on the cross,
So that I might be saved
From paying that cost.
Have a blessed Lent!
~Stephanie