In 5 weeks of traveling around Europe (primarily around France and Poland), I definitely noticed a lot of things about European culture. As with any different culture, the Europeans do things a little differently than Americans, whether because of their unique history, heritage, and cultural norms. It was really interesting to notice these different things about European culture, and I’d like to share some of my observations with you! 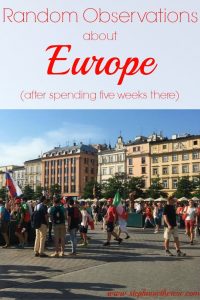 You often have to pay to use the bathrooms.
Found a public bathroom? There’s a good chance that there will be a small charge to use it. This could be the case at a tourist site, at a religious pilgrimage site, or even in a McDonald’s. Free bathrooms are relatively few and far between, so you learn to take advantage of one when you find one!

In France, they literally eat so much bread.
Everything you’ve ever heard about the French and their love for bread and their high levels of bread consumption ~ it’s all 100% true. Bread for breakfast (literally for breakfast), bread with lunch, and bread with dinner. Endless amounts of it. At one point in Poland, after having been in France for 2 weeks, I asked a French girl if it’s normal for the French to eat so much bread. And she said yes, and that it was weird for her to not be having bread with every meal in Poland.

While in Poland, they have more of an appreciation for meat.
Upon arriving in Poland and eating Polish meals, all my meat cravings (and my need for protein and anything besides carbs) were satisfied. The Polish are definitely more into “meat and potatoes” kinda meals, and they of course have lots of sausage and hearty soups. Yum.

There are churches everywhere.
In every village, town, and city, there’s a church. If not multiple churches. And it’s often situated in the center of the town, or it’s at least a focal point, wherever it’s situated. When we were driving across Germany to get to and from Poland, we could see little villages and towns from our big charter bus on the freeway, and in every single one there was always a church. And these European churches are, in most cases, really old, and every last one of them is gorgeous (both its interior and exterior).

Most towns have a town square.
Oftentimes in the central part of a town, there’s a town square. It’s an actual square shaped by the buildings around it, where no cars can drive through ~ it’s only meant for pedestrians. You can go there with friends and have dinner at one of the restaurants, or grab ice cream or a beer and sit somewhere and hang out. There might be live music playing and sometimes dancing to go along with it. You might go there during the day or in the evening. Whatever you do there, the town squares are such fun, lovely places to hang out with friends ~ I wish we had them here in the U.S.!

There’s KFC everywhere.
I don’t know what it is, but Europe, at least France, has some kinda something for KFC. We spotted more KFC there than McDonald’s! Any busy area with lots of food places, any rest stop, etc. ~ almost guaranteed to have a KFC.

People have mixed reactions when you tell them you’re from the U.S.
Some people get really excited and fascinated, and promptly ask you something about Los Angeles or New York City. (But then when you tell them what state you’re from, they have no idea what you’re talking about.) Then some people are like, “Ohhhh, America, uh-huh,” act a little skeptical, and maybe make some comment about Donald Trump or Hilary Clinton. It was always interesting to see how people would react when we told them we were Americans (although they could usually tell before we even said anything, ha).

Most places are closed on Sundays.
If you wanted to go out and about in a smaller town on a Sunday afternoon, chances are most places were closed. Many businesses in European towns, except for a few of the necessities, are closed on Sundays. I actually found this quite refreshing, and it helped remind me and my fellow Americans of how Sunday is a day of rest and family ~ not shopping and taking care of business.

Lunch is the biggest meal of the day, and dinner is smaller.
What usually constitutes lunch for us in America ~ a lighter meal ~ is dinner in Europe, and what’s usually dinner for us ~ a larger, heartier meal ~ is lunch for them. So for lunch we would have a hot meal of meat or fish, potatoes or rice, and vegetables, and maybe soup as an appetizer. Then for dinner, we would have sandwiches or some kind of lighter food. At first it was strange, since it’s mirror opposite of how we eat in the U.S., but it actually makes sense ~ having a larger meal in the middle of the day when you still need lots of energy, then having a smaller meal later in the day when you’re starting to wind down.

Europeans generally live quieter, slower lives than Americans.
There were several times when we were on the receiving end of weird looks or glares because of how “loud and obnoxious” we were being. There were even times when a French person would tell our group leader we needed to be quieter at meals (…oops). So while we Americans tend to be loud, often without even realizing it, Europeans tend to be quieter overall.

Also, in America our culture is very work-oriented and “go, go, go.” There’s pressure to hustle and be productive and live life at a fast pace. But in Europe, they tend to take life at a slower pace. They take their time at meals; they close their businesses in the evenings and on Sundays; they’re not constantly hustling and pushing to get as much work done as possible. I think we Americans can learn a little something from our European friends about appreciating slowness and quietness in life more.

To Lead All Souls to Heaven

Top 6 Highlights of the San Francisco Bay Area
Jesus, I Trust in You
Previous:
5 Things World Youth Day Taught Me
Next:
A Weekend on Mackinac Island