I’ve had many such instances in my life, especially during my college years so far. The day I got dropped off for my freshman year, one of my oldest + dearest childhood friends was hit by a car and suffered a traumatic brain injury, and nearly died.

Less than six months later, the 22-year-old daughter of friends that my family has known almost my whole life died from cystic fibrosis.

The day I came home for the summer after freshman year, my mom was hospitalized for chest pains that turned out to be a heart attack. She had to undergo open heart surgery to fix the problem.

Then during the first month of my sophomore year, my mom had to undergo another surgery to remove a mass that, thankfully, turned out not to be cancerous.

Other things happened during the two-year course of these events too. My family almost lost our house. I went through a breakup. My dad lost his job (again), adding to the on-again, off-again unemployment he’s dealt with since I was 13, and he decided to change careers.

Then just a couple weeks ago, on August 28, days before the start of my junior year, my grandpa passed away. My sister and I had to fly home to Michigan halfway through the first week of classes to attend his funeral. 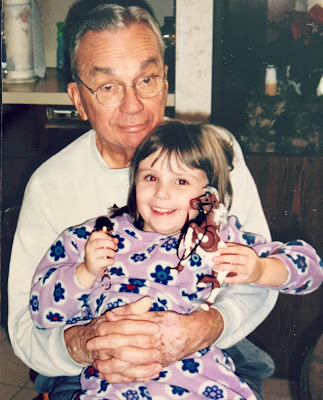 I grew up with my grandparents. My grandma + grandpa, as well as my other grandma, have lived 40 minutes away from me or less since the day I was born. They have always been involved in my life, from babysitting me when I was little, to attending every music + dance recital in elementary school, to being there for every important event in middle + high school, including choir concerts, plays, + graduation. In addition, we’ve always spent every holiday with grandparents + extended family, celebrated every birthday with them, and made frequent, random visits to their houses. This is how my life + my relationship with my grandparents has always been. And I realize that I am tremendously lucky + blessed because of it.

But it does make losing one of my beloved grandparents all the more difficult.

A large portion of my extended family was able to be present when my grandpa passed away, but my sister and I were stuck helplessly in Florida. Thankfully, we had the chance to call up to the hospital just hours before he died. My aunt held the phone up to my grandpa, who couldn’t speak or open his eyes or move anymore, and we talked to him one last time. We told him that we wished we could be there, that we were thinking of him and praying for him, and that we loved him.

And my aunt told us that while we spoke to him, his breathing changed slightly, and his eyes fluttered a bit. He could hear us and understand us. And, even though he’d suffered from dementia and hadn’t really recognized us in several years, I believe that in that moment, he knew us again. 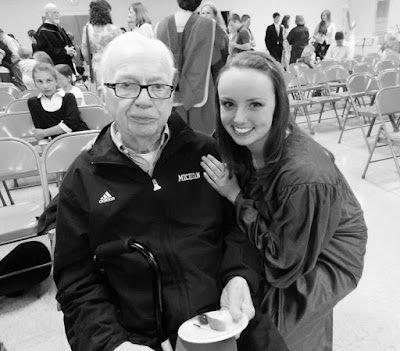 In fact, my aunt said that in his final hours, he was Grandpa again. He knew everyone again, and he understood everything. And, feeble and dying though he was, he was looking after everyone, just like he always used to. Reassuring my aunt (his daughter) that he would be okay. Asking my grandma (his wife) to sit beside him and hold his hand. Waiting for my mom and dad (his son), who were traveling home from taking Bridget and I to Florida, to arrive at the hospital so he could say goodbye to them. They were the last family members to arrive, and he passed away 20 minutes after they got there.

Bridget and I were able to fly home the night before the funeral to be there for what turned out to be a beautiful service. It was a day of intense emotions, because on one hand, I was genuinely happy to see so many dear friends and family members from near and far, yet at the same time, I was heartbroken over the reason we were seeing each other. 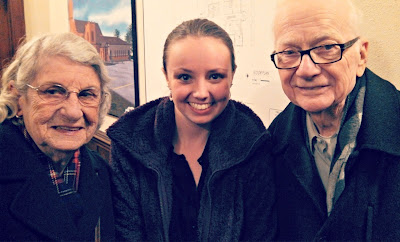 I was sufficiently drained emotionally by the end of the day and felt exhausted. But I was extremely grateful for my time with family, and that I was able to come home for the funeral. And I am thankful, most of all, for my grandpa’s life. He meant so much to so many people, and, while my family mourns his loss and misses him dearly, we know he is in a better place. We have hope in Christ, that He will have mercy on my grandpa’s soul and grant him his eternal reward.

And, as one dear family friend pointed out, now I have another intercessor in heaven.